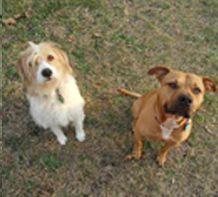 Mickey, an “ambassador” to Pit Bulls, found his forever home.

Mickey was originally brought to a local shelter by Animal Control as a pending court case seizure. After three months at the shelter, he was signed over by his convicted owner and placed with Dog4U, Inc. He was 10 months old and positive for heartworm disease. He was immediately treated and readied for adoption. Even after having lived through a rough upbringing, Mickey was the sweetest, most gentle dog to have ever been  through our program. He is one of the few “bomb proof” dogs we have dealt with; he has done well with any dog he has been introduced to. Due to regulations at most New England shelters, Pit Bulls are ineligible for transport. His only option was to await a local home. After three years at Dog4U, Inc., Mickey met his new owner for the first time. After multiple visits to Dog4U, Inc., an apprehensive Mr. Holland chose to bring a Pit Bull into his home. “I had serious reservations about bringing a Pit Bull into my household, but Mickey has proven to be a wonderful dog and settled in well. He has never been destructive and is well mannered. Mickey never gets overly excited and loves people, kids and dogs alike. He  even tolerates the local cats (mostly, though he occasionally gives them a run for their money). He is truly an ambassador to Pit Bulls across the country.”  Below are pictures of Mickey with his housemate Brynn, as well as with Taz, a female Pit Bull foster/sanctuary resident.

An excerpt from a review about Dog4U, Inc. that Mr. Holland posted on GuideStar.org

“Three things summarize my experience and involvement with Dog4U, Inc.: Donor, Adopter, and Volunteer. Initially I donated to the charity to support a noteworthy cause. I visited their facility on several occasions and eventually decided to adopt a dog. Bringing another dog home, totaling two in my household, was a major decision that took some time to make. Adopting a Pit Bull was the absolute last thing I ever would have imagined myself doing. Alas, I fell for a sweet, quite, friendly bulldog named Mickey. He has been a delightful addition to my family, probably the easiest dog I have ever cared for. He made a seamless transition and has been a wonderful playmate for my older female bird dog mix. After adopting Mickey I was offered the opportunity to make the 2000 mile round trip to Massachusetts as a relief driver for a rescue transport. As it so happened, the trip worked well with my business schedule so I signed on. It was an incredibly rewarding experience and I have participated in two transports since my initiation into animal rescue volunteer work. Having participated as a relief driver on three rescue transports going from South Carolina to New England since June of 2010, I can honestly say that the work Dog4U, Inc. does makes a difference in the lives of countless animals and a reciprocal number of people. My family and I support their mission and look forward to seeing it continue. -Carl” 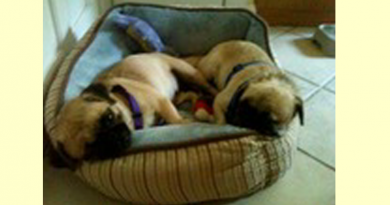 Penny And Ruby have been adopted 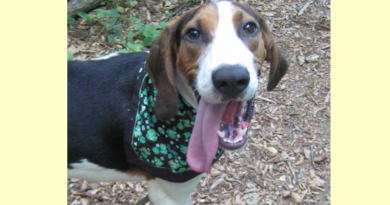 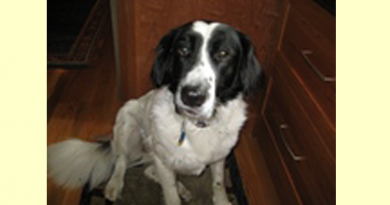 Tess has been adopted

Every time you purchase a Pet Naturals product through this link, a portion of the sale price is donated to Dog4U, Inc.